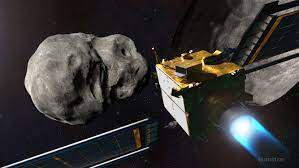 The NASA Dart mission launched on November 24th 2021 with the plan to change the path of an asteroid by crashing into it. The DART spacecraft was launched at Vandenberg Space Force Base in California. The DART project cost $324.5 million. $308 million was spent on spacecraft development, $68.8 million for launch services, and $16.5 million is expected to be spent on operations and data analysis. NASA tested DART not because any asteroid posed a threat but because they wanted to make sure their planetary defense mechanism worked ideally but if there was an asteroid that posed a threat this defense mechanism would protect earth from colliding.

The NASA DART mission was a success changing the direction of an asteroid for the first time ever making history. DART carries both 110 pounds of hydra-zine propellant for space maneuvers and altitude control and 130 pounds of xenon to operate the ion propulsion technology demonstration engine totaling up to 240 pounds of fuel. If the asteroid were to collide with earth it would wipe out all life except if it is too small ,but if it were too small it would not be proposed as a threat. Since the mission was successful the mission could make it so there is no earth collision with any space rocks that could hit it making the earth safer. In conclusion the DART mission was a success, made history, and can make the planet way safer from collision.